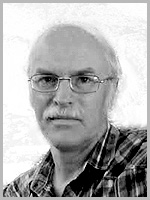 Doctor of physics and mathematics. Physicist and astrophysicist.

Author of 137 papers and one monographs. Reads a course of lectures on cosmology at the Physical Department of Moscow State University. Citation index in the version of SCOPUS is 1315 (at the end of 2016).

He finished school №154 in Moscow (1975).
He had graduated the Moscow State University, Physical Department with thesis “The experimental investigation of the excitation 1/2+ – isomer 235U by electron impact” (1982).
Candidate of science dissetration: “Quantitative investigation of the high resolution conversion electron spectra of usltrasoft isomeric transition of uranium-235”. Specialty 01.14.16 – the physics of atomic nucleus and particle physics (1997)

Doctor of science dissertation “Energy spectra of primary cosmic rays from protons to iron from the data of the ATIC-2 experiment”. Specialty 01.14.16 – the physics of atomic nucleus and particle physics (2014)

He was awarded the Tsiolkovsky Medal for Merit in the exploration of outer space and is a laureate of several academic competitions.