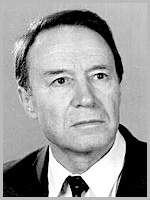 Professor Georgi Pavlovich Gladyshev, President and founder of the International Academy of Creative Endeavors, as well as the Academy of Science, Arts and Social Issues (Akademiya Tvorchestva, Moscow, Russia), is the son of Pavel Gladyshev and Apollinariya Zaikova. Born on 19 September 1936 in Alma-Ata, Kazakhstan, he graduated the Chemistry Department of the Kazakh State University in Alma-Ata and received the Degree of Candidate of Science in 1962 and a Doctorate Degree in polymer chemistry in 1966. He became Professor of Physical Chemistry in 1969 and in 1970 chief of the laboratory at the Institute of Chemical Physics of the USSR Academy of Sciences in Moscow; a position he still holds. Since 1968 he has been a visiting professor and scientific adviser at several state universities, industrial plants, and firms. In 1989 he was elected President of the Academy of Creative Endeavors of the USSR (now the International Academy of Creative Endeavors). In 1990 he became the head of the Institute of Ecological Biophysical Chemistry. He is the author of more than four hundred scientific articles and eight monographs in the fields of Physical and Polymer Chemistry. His latest monographs include “Thermodynamics and Macrokinetics of Natural Hierarchical Processes” (Nauka, Moscow, 1988, 288 p.) and “Ecological Biophysical Chemistry” (Nauka, Moscow, 1989, 135 p.). He has conducted research in the fields of polymer chemistry, the physico-chemical mechanism of the formation of the planetary system, the mechanism of chirality formation, the nature of ball lightning, biological evolution and macrothermodynamics. Member of Editorial Board of Scientific-Philosophical Journal “Philosophy and Cosmology”.