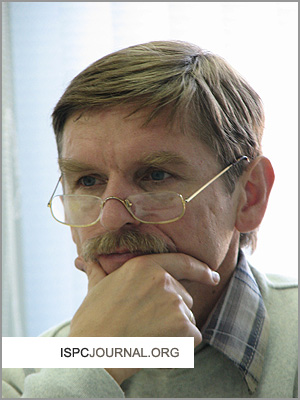 Gennadii Evgenyevich Aliaiev (31of october 1958 g. Cornflowers, the Kiev Region) – the Doctor of Philosophy, the professor, the expert in the field of history of the Russian and modern philosophy. Author over 200 scientific works. The cochairman of Society of the Russian philosophy at the Ukrainian philosophical fund. Deputy editor-in-chief of the scientific and philosophical magazine "Philosophy and Cosmology".
gealyaev@mail.ru

From 1990th years develops a perspective of history of the Russian philosophy, a priority personnel – S.L.Frank, and also V.S.Solovyyov, N.O.Lossky, V.V.Zenkovsky, etc.

Since 2002 as a part of a group of authors of chair of history of philosophy of philosophical faculty of the Kiev national university of a name of Taras Shevchenko under the leadership of the Doctor of Philosophy, professor V.I.Yaroshovts takes active part in preparation and the edition of a number of textbooks and the "Philosophy History" dictionary.

Since 2009 is the cochairman of Society of the Russian philosophy at the Ukrainian philosophical fund, takes active part in society holding of conferences (including in 2007 and 2011 such conferences were organized in Poltava) and the edition of the Messenger of Society.

Certificate of honor of the Supreme Council of Ukraine 2005.